Book Reviews: The Last Woman in the Forest ... In the House of Wilderness ... Ten-Seven ... 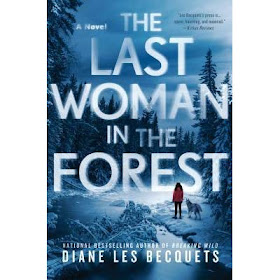 The Last Woman in the Forest, Diane Les Becquets … I probably learned more about the wilderness and endangered wildlife, the rescue dogs used to work the territories, and several other science-based tidbits of life in the wild from this one novel than I’ve known over my collective 62 years, all of it fascinating, but it is the story that turns the pages.

Marian Engström, a woman already familiar and in love with wildlife, works with rescue dogs in the upper reaches of Alberta. She’s there to help preserve and save wildlife, taking samples of droppings for analysis. It’s no walk in the park. Between the weather, the snow, the treacherous terrain, it can be as dangerous as mountain climbing with toothpicks to both the dogs and the people doing the work. She’s paired up with a guy who knows his business and is a solid teacher. Marian is attracted to his knowledge and demeanor, and eventually winds up in a relationship with him. Tate is his name, and he’s a man with a somewhat mysterious past. Marian loves Tate before long, but then they are separated by their jobs, each getting a different assignment. It’s during their time apart when she learns of his sudden death from a bear attack.

She’s overwhelmed by the news, but she soon learns about a few unsolved murders of women that may or may not have been committed by the man she loved. When she begins to do her own research, Marian learns that much of what Tate had told her about his past requires further investigation.

The more she pokes and prods into Tate’s background, in her attempt to clear his name and free her mind of what or who she might’ve been in love with, the darker things become. Consumed by the thoughts she’s having about what Tate might have been, she approaches a retired forensic profiler who is already familiar with the missing women.

Nick Shepard is the retired profiler, a man suffering from cancer. He knows the profiles of people, especially women, vulnerable to the kinds of manipulation serial sociopaths prey on. They are often trusting and eager for love, to give and be loved. Marian fits the profile, but there’s the chance Tate isn’t a killer, and she goes from wanting to know to having to know.

We’re also provided with the individual stories of the missing women and what happened to them. A composite profile is there, but can Nick survive long enough to inform Marian? Can Marian survive? Was Tate the killer?

Her pursuit of the truth is a compelling read, as is the back and forth frames of reference. Marian’s story is told in varying time references, including the stories of the missing women, from before she first met Tate to her present-day struggles with what happened and who he might’ve been. It’s clever writing that keeps one engaged throughout.

Les Becquets’s last novel, Breaking Wild, was a wonderful book, one of my favorites the year it was published. This one is a terrific chaser. You’ll turn the pages and investigate side-by-side with both Marian and Nick.

I suspect women especially will appreciate the strength and determination of Marian’s struggle to find the truth, but make no mistake, this man enjoyed every page of this thriller.
Get The Last Woman in the Forest here: 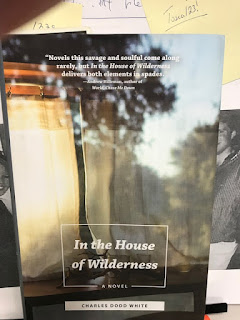 In the House of Wilderness, Charles Dodd Wright … One of the very best books I’ve read this or any other year. Charles Dodd Wright is a brilliant author, and although the terrain he offers his readers couldn’t be more foreign to a city boy like myself, the cadence and rhythm of his writing kept me mesmerized.

His novel here involves three drifters constantly on the move. Their home is wherever they can find refuge. Their possessions are what they can carry. Rain is the woman we follow. She is caught in a triangulation of survival within the closed family. She was once mesmerized by the survivalist, Wolf. Rain isn’t her real name. It is her chosen name. Rain is one wife, the “Little Bit,” but there’s another wife, an older woman named Winter, a woman who’d been with Wolf before Rain. The family of three struggle to survive off the grid, except when desperation requires a quick hit back onto the grid. Whether seeking shelter, coin, or a victim who might help them sustain their chosen way of life, desperation exists around every corner. Their life on the move is an extra raw deal for both Rain and Winter, because Wolf will put them on the street to secure coin for food and/or temporary lodging.

One day Rain is sent on a sustenance errand to town for groceries and beer. She is looking to hitch a ride back to the family campsite and winds up taking a ride from a man named Stratton Bryant. Although she’s initially suspicious, Rain finds his offer to drive her a measure of kindness. It is a kindness foreign to the world Wolf has created for her; a kindness he’s purposely shielded her from. Unfortunately, the desperation of surviving the wilderness leads the family of three to the house where Stratton lives while he is away. Wolf and his wives take what they can, but Rain doesn’t partake in any of the excessive damage Wolf seems to enjoy. Rain does take a photo Stratton’s wife had taken and keeps it close.

Stratton is a recent widower and a professor. His wife was a photographer of significance and he’s been asked to give her works away. He’s a man with the same insecurities and desires as most men, and when Rain returns to the scene of the crime, apologizes, and then offers to help him around the house as reparation, Stratton takes her in and offers her what she’s never had, a semblance of stability.

Stratton’s world involves other people, the connections necessary to life. They are connections Rain has yet to experience, and those Wolf has avoided at all costs. Rain sees Wolf’s tiny world for what it is, for what it has been, and when the timing is right, she escapes.

The eloquence of the author’s narrative is a marvel. It is a pleasure to read his words, the cadence and poetic fluidity keep one’s eyes moving forward. Within a few paragraphs of the book’s opening, I felt I was there, in Appalachia, in East Tennessee, in a world I’m completely unfamiliar with, yet drawn to word by word, sentence by sentence.

There’s more to the novel as Rain’s life takes a turn for the better, meeting friends of Stratton’s, a girlfriend at the school she’s enrolled in, and a young man she has a relationship with, a young man ultimately too young to handle her past, but it is a turn outside of the world Wolf can accept. Their stories run a parallel line that eventually meet yet again.

No spoilers here, but this writer has the chops guys like me can only wish we were born with. He easily vaults to a category of author I consider top of the line. He joins a group of new favorites and old: Chris Offutt, Joseph Haske, Cormac McCarthy, Lynn Kostoff, etc., writers I wish I could be. I’ve ordered a collection of White’s stories and intend to read everything he’s penned.

In the House of Wilderness is an excellent read by a brilliant author. Under no circumstances should you pass this one up.

And thanks to Gonzalo Baeza for reading recommendations that never fail.
Get In the House of Wilderness here: 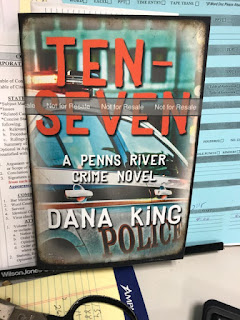 With an opening chapter that sets the hook deep, Dana King maintains the streak of Penns River successes with Ten-Seven. The old gang is back: Ben “Doc” Dougherty; his boss, Stush Napierkowski; and the kid he helped saved a few books back, Wilver Faison. So is perennial pain the ass bureaucrat, Deputy Chief Jack Harriger, and a slew of references that make knowing the prior books all the more pleasurable, although not necessary to enjoy this one.

That opening chapter (the hook) is set with a sudden and brutal murder. There were witnesses, two women friends of the victim who were sitting in his car, when Doug Stirnweiss bought it in the parking lot of the casino they’d just left as a group. Both recall an incident at the blackjack table where Doug was sitting with another man and breaking his balls. Could the guy at the table have been the murderer? Could a police case come together that easily?

Good old police grunt work, questioning those inside the casino and out, provide leads that quickly go nowhere. An incident involving drugs changes their direction and maybe puts Doc and his fellow law enforcement on the right track, but overzealousness can lead to tragedy and does.

And then there’s Mike Mannarino, the local made guy with connections to New York. His crew is down to two wiseguys and a few spinoff associates, but there’s trouble Mr. Mannarino didn’t account for, and he becomes the intended victim of an attempted hit.

Or was he the intended victim? Was it from New York? Someplace else? Should he flee the area or try and dupe the big boys back East, and maybe flee to Chicago?

In the midst of a rough week, Doc has to deal with a bridge jumper, an experience that can only go one of two ways, leaving an attempted rescuer euphoric for saving a life or dejected for losing one.

Consistently one of the best in the business. As good as any I’ve ever read. Dana King, to quote Don Kirkendall of the blog Men Reading Books, is “top shelf entertainment.” Ten-Seven keeps that ball rolling.
Get Ten-Seven here: